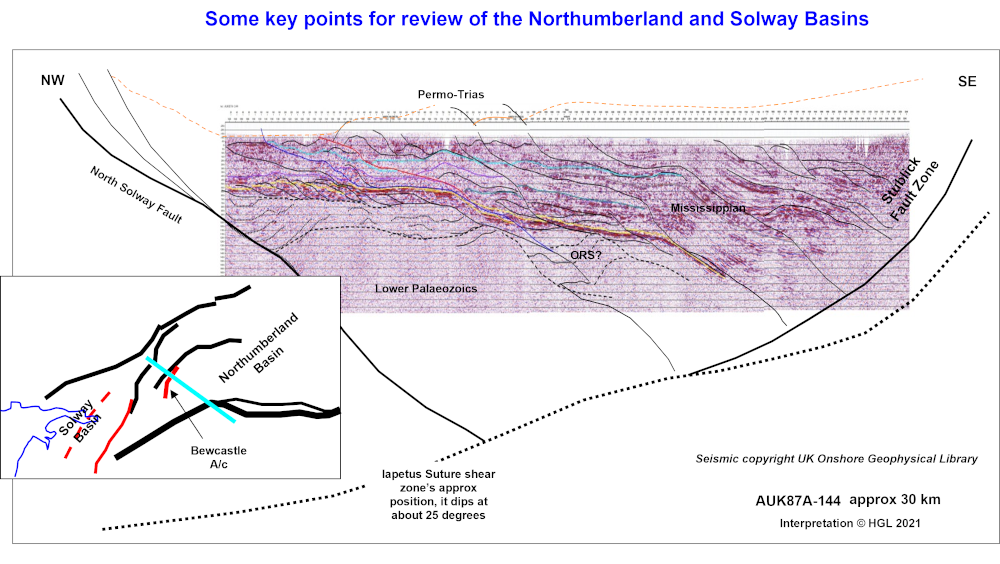 This north-south section across the Bewcastle area, near the boundary between Northumberland and Solway Basins, is a good representative model for their structure style. Here the Permian and Triassic is missing by erosion and the infill is mainly Mississippian, which is about 4-5000 metres thick on the south flank, lying across Old Red Sandstone depocentres. The southern margin is defined by the syndepositional Ninety Fathom and Stublick fault systems, separating it from the granitic Alston Block: these have very large throws, the rifting was mainly Courceyan to Holkerian. These major faults root onto the extensionally-reactivated Iapetus Suture, which was established by Caledonian subduction of Eastern Avalonia (the Lake District) northwards under Laurentia (Southern Uplands).

The main structural block pattern is the same as in the Solway Firth, with ramps dipping southeast. Intra-Carboniferous floor faults, ramps and sidewalls are typically spaced about 5-10 km apart. Caledonian lineaments trend NE-SW. The rifting and opening of northern North Sea in the early Permian was an east-west extension, so a simple model for the inversion on NE-SW faults rooting into the deep ramps is that it is transpressional, and caused dextral reactivation of the growth faults. The Stephanian Variscan compression shortened the Basin and inverted them obliquely to create hangingwall rollovers on the steeper ramps. These inversion folds are the main prospects in the basin, they are potentially large gas plays.

Next page
We use cookies on our website to give you the most relevant experience by remembering your preferences and repeat visits. By clicking “Accept All”, you consent to the use of ALL the cookies. However, you may visit "Cookie Settings" to provide a controlled consent.
Cookie SettingsAccept All
Manage consent